SOMM Recordings is proud to announce the premiere recording of Ian Venables’ exquisite and moving Requiem with the Choir of Gloucester Cathedral conducted by the Cathedral’s Director of Music Adrian Partington and Assistant Director of Music Jonathan Hope playing the organ.

Completed in 2018, the Requiem received its first performance in the imposing surroundings of Gloucester Cathedral, where this recording was made in 2019.

Widely acclaimed for his songs and chamber music, the Requiem is Ian Venables’ most substantial choral work to date and is a compelling piece full of fine melodies and gorgeous harmonies.

Adrian Partington describes the Requiem as “a significant addition to the choral repertoire. The music is eloquent, resourceful and exerts a strong emotional appeal”.

Ian Venables comments: “Composing a Requiem is a daunting creative challenge because so many great settings have been written in the past. However, as a composer of songs, words are always crucially important to me and I found that the words of the Mass for the Dead came to appeal to me strongly. I felt an overwhelming desire to set them to music. I am delighted that Adrian Partington, his excellent choir and Jonathan Hope have brought my music so vividly to life.”

“Ian Venables’ Requiem … [is] a profoundly heartfelt work… In a programme which is otherwise notably sombre, Venables’ own anthem, O Sing Aloud to God, with its Rutteresque snap and Mathias-like jauntiness (not to mention its central episode in homage to Howells) provides a pleasingly extrovert conclusion. … Throughout the disc Adrian Partington draws singing of the very highest order from the Gloucester Cathedral choir, Jonathan Hope is a hugely sensitive and perceptive organist and the recording is exemplary, setting the choir and organ in a very real acoustic ambience. A disc for all lovers of the English cathedral tradition and especially for those who like it enveloped in that unique Gloucester musical atmosphere.” —Marc Rochester, MusicWeb International

“His Requiem, Op. 48… goes through a wide variety of moods before ending with a warm, consoling, and ultimately radiant Lux aeterna. … The Gloucester Cathedral Choir under Adrian Partington has sung parts of the work in the past and have learned to live in it, and the engineering, from Gloucester Cathedral itself, is top-notch. This is an important new setting of the requiem mass.” —James Manheim, AllMusic (4.5 Star Review)

“I usually end a review of music that I have been hearing for the first time by saying that I expect – or don’t expect, sometimes – to grow on me. On this occasion there will be no need for the music to bed into my unconscious; it finds a ready response there, somewhere alongside the poetry of Wordsworth, Vaughan Williams’ Tallis Fantasia, Finzi’s Dies natalis and the poetic prose of Traherne which inspired it.… [it’s] another mark of the dedication of this label… to the cause of fine new music. I hope that I have whetted enough appetites for this recording to sell well to all who love the British choral tradition. It certainly deserves to do so. … Don’t hesitate.” —Brian Wilson, MusicWeb International (Recommended) 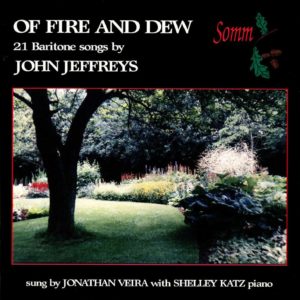 Of Fire and Dew
Shop Now