Featuring recordings made for Decca and the BBC between 1946 and 1953, it includes a previously unpublished recording of Ferrier’s passionate performance of Lennox Berkeley’s Four Poems of St Teresa of Ávila.

Sir Thomas Allen, the distinguished interpreter of British song and Trustee of the Kathleen Ferrier Awards, contributes an extensive booklet commentary that brings a lifetime’s experience to bear in an insightful analysis of Ferrier’s dexterous and treasured talent, accented by the distinctive tones of her native Lancashire.

The earliest recording, from 1947, is of Benjamin Britten’s ‘The Flower Song’ from The Rape of Lucretia, the latest, from 1953 (both BBC recitals), includes Howard Ferguson’s lovely five-part Discovery, three songs by William Wordsworth and Edmund Rubbra’s Three Psalms, specially written for Ferrier.

Pianist Julian Jacobson, son of composer Maurice Jacobson, whose melancholy but sensuous The Song of Songs is heard in a 1947 BBC broadcast, also provides a personal poignant note on Ferrier’s championing of his father’s music.

Previous Ferrier releases on SOMM include Kathleen Ferrier Remembered (SOMMCD 264), which prompted Norman Lebrecht to say “I would not want to be without this record of an immortal artist, and nor will you once you have heard it”, Kathleen Ferrier in Celebration of Bach (Ariadne 5004), which Audiophile Audition’s five-star review said “carries us into a realm of rapt devotion”, and the Gramophone Editor’s Choice, Kathleen Ferrier in New York (Ariadne 5007), hailed as “a treasure to be sure”. 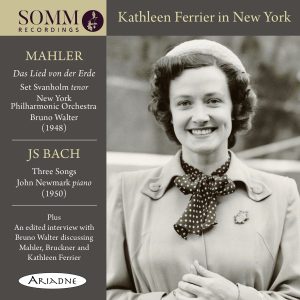 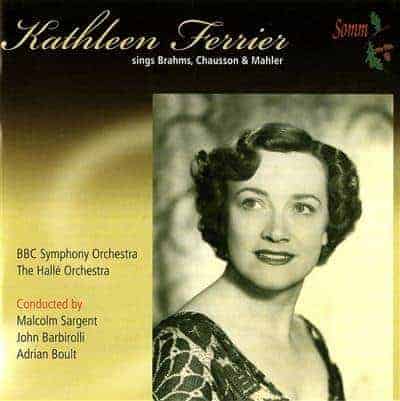 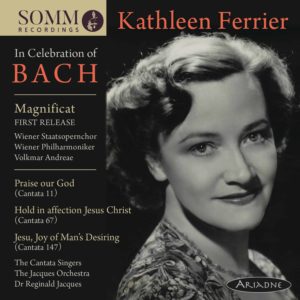