The Carlock-Combet Duo return to SOMM RECORDINGS with a trio of ravishing Romantic Violin Sonatas by Schubert, Robert Schumann and Grieg.

The 20-year-old Schubert’s genial and outward-looking Violin Sonata in A major (D574) explores the expressive range of the violin to the full and is, says Robert Matthew-Walker in his informative booklet notes, “a masterpiece of the late Classical era worthy to stand with the finest examples of Beethoven”.

The violinist Joseph Joachim considered Schumann’s Op.121 Violin Sonata in D minor to be “one of the finest compositions of our times in respect of its marvellous unity of feeling and thematic significance. It overflows with noble passion, almost harsh and bitter in expression, and the last movement reminds one of the sea with glorious waves of sound”.

The Carlock-Combet Duo’s debut SOMM release, Violin Sonatas by Franck, Poulenc and Saint-Saëns (SOMMCD 0169), was praised by Musical Opinion as “an engrossing programme” with “performances of fine musical insight”, and was a MusicWeb International Recording of the Year.

Of Sandra Carlock’s solo recital of Piano Music by Edward MacDowell (SOMMCD 043), Gramophone said “it would be hard to imagine a more glowing or ardent champion”, while MusicWeb International declared it “a thoroughly recommendable disc in which everything sounds just right”.

“From the outset, listeners will enjoy violinist Guillaume Combet’s luxurious, old-fashioned sound and the rich acoustic… the closing [Schumann Sonata Op. 121] movement, ‘Bewegt’, maintains energy and momentum throughout… The [Schumann] Scherzo is a teasing, elusive delight, its sensual Trio a lovely contrast. This is Schubert played most charmingly. …again, it is the fascinating final movement [of the Grieg Sonata] which is most enjoyable; a magical, turbulent, folk-inspired journey which the duo tackles with passion and energy.” — Natasha Loges, BBC Music Magazine (Full Review) 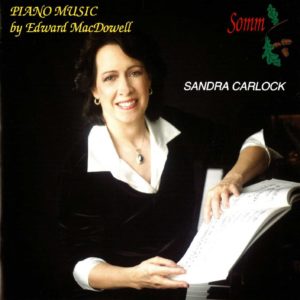