In the centenary anniversary year of Hubert Parry’s death, the eagerly-awaited second volume in Somm’s complete survey of his English Lyrics highlights a deeply-felt connection to the richly evocative language of the Elizabethan and Jacobean eras. There is breadth, too, ranging eloquently into the romantic realms of 18th- and 19th-century texts and the nascent modernity of the 20th century.

Tenor James Gilchrist, baritone Roderick Williams and pianist Andrew West are re-united from Volume 1 here, with soprano Sarah Fox contributing to the three-volume series for the first time. Plaudits for Volume 1 included The Classical Reviewer hailing it “an auspicious start to this series”. BBC Music magazine admired the “many pleasurable moments in this richly enjoyable CD” while Gramophone approvingly declared “Roll on Vol.2!”
Drawing on texts spanning five centuries, this second volume reveals Parry’s wide reading of English poetry and includes Book 9 of the English Lyrics – featuring seven songs by Mary Coleridge (great-grand-niece of Romantic poet Samuel Taylor Coleridge) – in its entirety. Among the treasures it contains are ‘The Maiden’, a fantasy-accented hymn to Spring, the meditative love song ‘Whether I live’ and the sensuously melodious ‘Armida’s Garden’ – described by Parry expert Jeremy Dibble in his booklet notes as “arguably the masterpiece of the collection”. Titans of English poetry are heard in settings of Lord Byron, John Keats (the wide emotional range of ‘Bright Star’ treated by Parry to a bold tonal scheme and masterly harmonies) and the powerful lament of Percy Bysshe Shelley’s ‘O World, O Life, O Time’, in which, Dibble suggests, “we catch a glimpse of Parry’s inner soul”.
Among the romantic poets featured is the dark, miniature ballad with words by Walter Scott, ‘Proud Maisie’, while Parry’s contemporaries George Meredith and Allan Cunningham offer exquisitely-realised source material and the poetic tradition of Wales is heard in the serene ‘A Welsh Lullaby’. The 23 songs on this recording serve to underline the impression from Volume I of Parry as a songwriter of enormous variety and acute sensitivity, whose vivid and variegated musical championing of English poetry set a standard for English song that has been much imitated, seldom bettered.
This release will be supported by Jeremy Dibble’s profile of Parry in the June issue of Gramophone magazine. 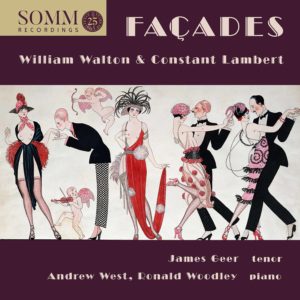 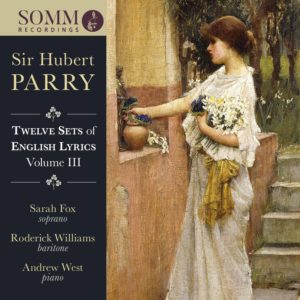